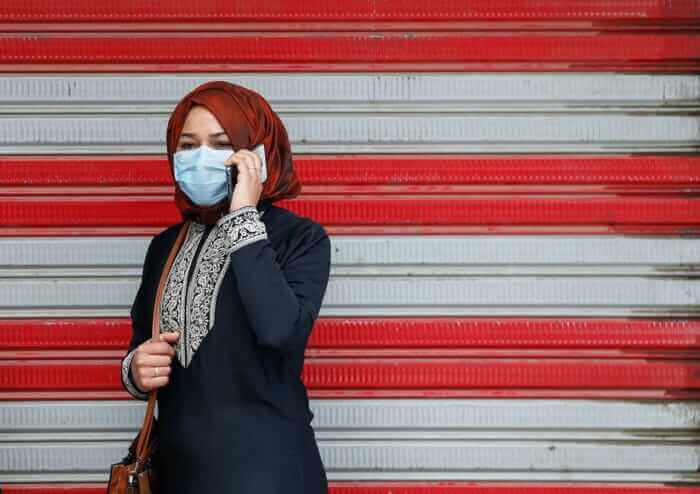 Afghanistan, a country located in central Asia with a population of over 38 million and a life expectancy of 61-64 years in men and women respectively, has been facing decades of war, social problems, and intense poverty for more than a century. Since the 1970s, social conflict and civil war have led a large number of the population to suffer from mental health problems, mostly in youths between the ages of 18-25. Health care delivery is a significant challenge, and the number of facilities and medical equipment is not adequate. The government is actively working on this situation by prioritizing mental health, but progress is very slow.

With the help of digital health technologies, telemedicine can offer various health solutions to strengthen health care in rural communities, home health care in developing countries, and countries that lack adequate health and personnel infrastructure. Even creating a small network for consultations using mobile applications has the potential to offer improved health outcomes.

“We’ve been extremely active bringing education and personal protective equipment to tens of thousands of people in Afghanistan,” said Najeeb Wardak, founder, and president of Third Track Social Movement (TTSM), a humanitarian organization created by the first generation of college-educated young people after thirty years of war. “While we are proud of what we have accomplished, what we witnessed first-hand was the need for care – for testing, for treating, for understanding when people who contract the virus need immediate hospital care. In the future, with remote doctors, nurses, and health navigators, we can go beyond the basics – masks, hand sanitizer, social distancing, and safety practices – and begin delivering care to our people, including the most vulnerable.”

Roshan, a leading telecom operations provider, serving over six million active subscribers, based in Kabul, Afghanistan, launched a Telemedicine solution in 2007 to expand health care access and delivery across the country. Using a combination of wireless video consultation and digital image transfer, the telemedicine project provides hospitals in Afghanistan with access to specialist diagnosis and treatment and training expertise from abroad, says Roshan.

In 2009, Roshan announced the expansion of Telemedicine solutions in Afghanistan beyond Kabul to include provincial hospitals. Bamyan Provincial Hospital was the first regional medical facility associated with the innovative telemedicine project, which uses broadband technology, wireless video conferencing, and digital image transfer to provide hospitals in Afghanistan with real-time access to specialist healthcare diagnosis, treatment, and training expertise from abroad. The second phase of the telemedicine project couples BPH to the FMIC, which is being developed as an Afghan center of medical excellence.

Telemedicine has since been extended to other provincial hospitals with plans to expand to medical institutions in Europe and North America eventually. The Telemedicine project developed in Afghanistan is also seen as a model for addressing healthcare delivery shortcomings in other developing countries where access to medical diagnosis, treatment, and training is limited.

According to the World Health Organization, Afghanistan has 4.8 doctors, nurses, and health workers for 10,000 people, while the global standard is 23 per 10,000 to ensure access to basic healthcare. Various foundations to provide telemedicine in Afghanistan have been established but remain insufficient for a country with limited resources.

“I applaud the evolution of telemedicine in Afghanistan,” said Dr. Altagracia Miranda, a physician based in Miami, Florida who has established telemedicine clinics in Puerto Rico and in Nepal, where a second clinic is being opened this year. She is also co-founder of TeleMedCo, a technology, and services company delivering telemedicine and telehealth services to older adults and military veterans in the US. “There are millions of people around the world, often in rural areas and highly-populated urban areas which are equally underserved, and by bringing the applications, networks and healthcare professionals to those patients, we can scale quality care in a very compassionate and efficient way. During this tragic COVID-19 pandemic, we have learned what we can do – and must do – given that we know there will be future population health emergencies.”

Miranda also said, “Especially when we combine basic telemedicine with low-cost, accurate, and broadly available medical devices – for example, blood pressure and heart monitors, thermometers, oxygenators, glucometers – we make extremely affordable and ultimately universal quality care on an ongoing basis possible. Remote Care Management and Chronic Care Management improve and extend lives, provide extremely valuable data which contributes to population health improvements, and to the very underlying science successful medicine is based on. Beyond offering day-to-day comfort and care, in the future we will be much more able to respond to events, from conflicts and terrorist attacks to epidemics and pandemics.”

Telemedicine involves the use of broadband technology that provides real-time high-speed access for the transfer of medical imaging, video, data, and voice. Applications include the ability to send real-time X-ray, ultrasound, and CAT Scans (Computerized Axial Tomography) for evaluation. Roshan has spearheaded the development of the Telemedicine project from initial conceptualization through implementation through its Corporate Social Responsibility arm and is part of its ongoing commitment to serving as a catalyst for the reconstruction of Afghanistan.

Telemedicine has also been set up to conduct teleradiology, telepathology, and even hospital management. Since 2007, through Roshan’s Telemedicine link, more than 15,000 patients have received the treatments they require, and nearly 6,000 teleconsultations and teleradiology sessions have been conducted. Alongside this, more than 4,000 doctors and health professionals in Afghanistan have been trained through telemedicine.

In Northern Afghanistan, Telemedicine Service was launched by Gesellschaft für Internationale Zusammenarbeit (GIZ) and Kreditanstalt für Wiederaufbau (KFW) in 2010 initiating telepathology. After a couple of years, teledermatology and teleradiology were also introduced. More than 1600 cases have been submitted via the Internet to European pathologists and cytologists, in addition to 100 radiological and 10 dermatological cases to experts in the related fields. It is concluded that telepathology and telecytology are based on simple techniques and are optimal tools to increase diagnostic and therapeutic quality in medical health care in Afghanistan.

Arian Teleheal is another foundation led by Dr. Waheed Arian, an emergency doctor for the NHS in England for Afghanistan established in 2015 and a UK-based charity. The foundation enables doctors working in a warzone and low resource countries to consult with expert clinicians from across the world by using standard technology such as smartphones, instant messaging, and video chat. From the beginning of the coronavirus pandemic, Dr. Waheed and his colleagues have been working on the frontlines to provide the service. This foundation has provided live weekly tutorials to healthcare service providers following the World Health Organization (WHO) guidelines. The team is also working closely with COVID-19 patients.

“Despite improvements over the last decade, Afghanistan’s healthcare system remains poor,” Najeeb Wardak said. “Due to security challenges, most of the doctors and healthcare facilities are limited to larger cities. Our future opportunities include bringing care to all the provinces and all the people using telemedicine.”